Code prettifying disappearing and reappearing? (may only affect IE 8.)

[Edit] I first noticed this issue while working on a Python thread, but later I discovered it also affected a C# thread. So it was bigger than just Python (I changed the title for the sake of SEO). I was using IE 8 when I experienced the issue. Meanwhile, I found code prettifying worked in Firefox, and later, it returned to IE 8. ...hmm?

If I catch it again, I'll use Fiddler to see if any JavaScript libs are 404 (though that would be obvious and affect alot of people). The SE network implements Google Code Prettify, and I know Google is dropping IE 8 support all over the place. So it may just be that IE 8 support is waning---and really that's expected, and ultimately a non-issue. On the other hand, something about code syntax highlighting may just be intermittant.

I reviewed the meta post discussing how to ensure code blocks in a post get proper syntax formatting. However, I created a python question and all the line breaks and spacing are stripped out.

The question is tagged for python (though, not "py", as the meta post implies it should be, however "py" isn't an existing GISSE tag and it seems redundant to create it). So while I think I built it correctly, I'm just curious if there is something I'm overlooking that is causing the .py code to get trimmed.

It definitely makes it harder for folks to "see at a glance" anything that might be wrong in the code. Also, if someone copy/pastes the code into their editor, they will have to go to the trouble to clean it before they could even run it. So I'd definitely like to fix the py code in that post if possible.

Akk.. the answer is, the code formatting won't work in IE 8. I opened the thread in a recent install of FireFox and bingo, it's as it should be. 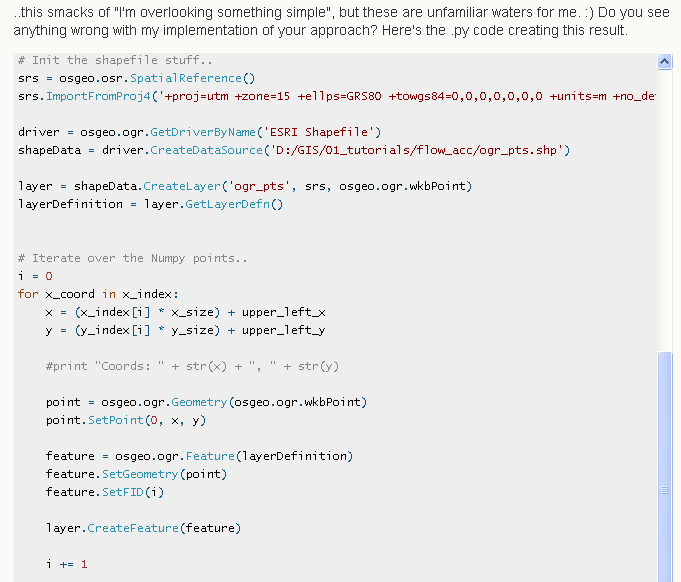 Not the answer you're looking for? Browse other questions tagged support .

1
How to see own Accept Rate and what is algorithm that determines whether it will be shown
3
How do I post code in the blog?
3
How to post Angular brackets in code?
4
Synonymizing license, licence, legal and copyright tags?
4
Question regarding the “Disciplined” badge and deleting my own answer
6
Why are some code samples occasionally not colored?
4
Unsubscribing from Stack Exchange site and deleting profile?
20
Why was 6 year old question with accepted answer closed?
5
Changing Google Earth Engine support link text and image
5
Formatting text as code inside a numbered paragraph