What to do with not-a-question questions?

While doing a review, I saw this "first question" Creating simple citygml 3D models based on 2D shapefiles (alkis) shp2gml using Python?. To my surprise, the OP posted a first question with the sole purpose of sharing a (lengthy) solution he/she found after some research.

What's the appropriate action for this kind of questions?

I left a comment suggesting to post the solution as a self-answer. But I just wanted to check with the meta.

I agree with you.

As someone coming across this question via your Meta question, rather than via the Review Queue, the action I took and would suggest is appropriate in either case, was to make a comment (like you did) but also to apply a downvote to draw the asker's attention to the high desirability of correcting the "Q&A format breakage" (and not rewarding it). In such cases I would only downvote if there was a net positive score because downvoting well written content to a negative score is likely to attract an immediate sympathy upvote which undoes the desired message. Once the Q&A was largely fixed I withdrew my downvote.

An alternative of voting to close as "unclear what you are asking" would not work because it would prevent them self-answering (the very action that we want them to learn to take).

Self-answering is quite acceptable here, and encouraged. There is even an option to Answer your own question while posting a Question 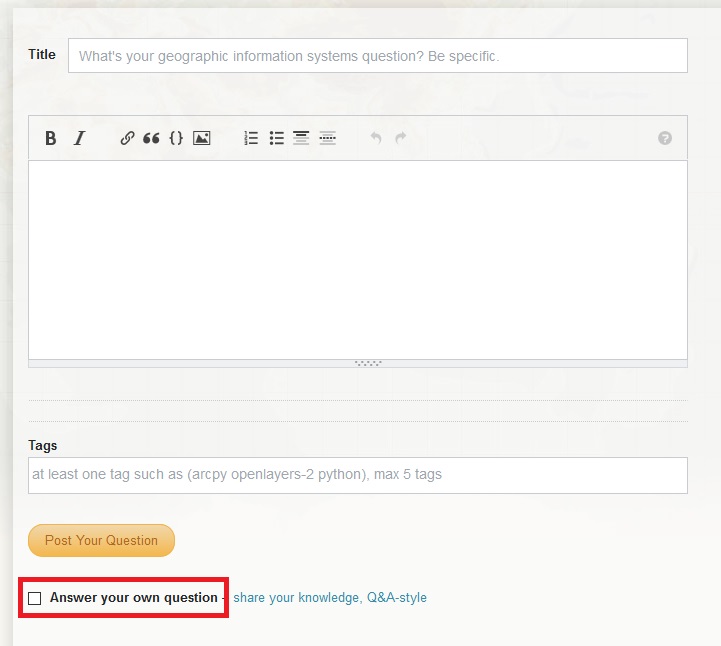 An answer should not be given in the body of the question, rather it should be formatted as a question and then the solution given in an answer.

Not the answer you're looking for? Browse other questions tagged discussion questions .

27
Why are there so many question with no votes but with answers that have upvotes?
8
Should we move to close old, abandoned questions with not enough detail?
8
What happens to questions with no answer where person asking told the question is not relevant anymore?
2
Should an off-topic question with an accepted answer be placed on-hold?
4
Should older questions not meeting current standards be closed or locked?
15
Are only software-specific questions allowed?
9
Dealing with unethical questions?
11
What to do when question edits were rolled back?
4
2020: a year in moderation
9
What is the canonical question to close "layers with the same CRS not overlapping" questions as duplicate of?