There are two tags that I think a number of people are generally confused about date-line and antimeridian. People sometimes use these interchangeably, but they are quite different things.

The antimeridian is simply the 180th meridian:

The 180th meridian or antimeridian is the meridian 180° east or west of the Prime Meridian, with which it forms a great circle dividing the earth into the Western and Eastern Hemispheres. It is common to both east longitude and west longitude. It is used as the basis for the International Date Line because it for the most part passes through the open waters of the Pacific Ocean. However, the meridian passes through Russia and Fiji as well as Antarctica.

Dealing with the antimeridian in software and data is not fun, but I'm sure that the International Date Line has its own special place in hell: 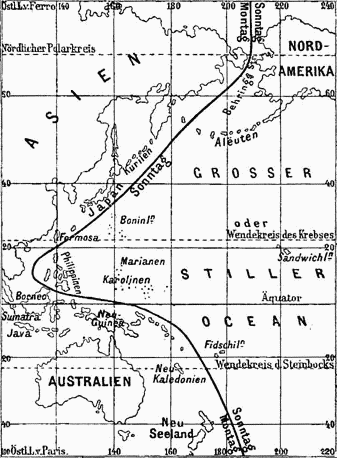 As part of New Spain, the Philippines long had its most important communication with Acapulco in Mexico and was accordingly on the east side of the IDL despite being at the far western edge of the Pacific Ocean. From 1521 to 1844, the Philippines was one day behind its Asian neighbors (1521 was the first European visit, when Ferdinand Magellan claimed the area for Spain. Colonization began in 1565). After Mexico gained its independence from Spain in 1821, Philippine trade interests turned to Imperial China, the Dutch East Indies and adjacent areas, so the Philippines decided to shift back to the west side of the IDL by removing Tuesday, 31 December 1844 from its calendar.[10] The change was also applied to Mariana Islands, Guam and Caroline Islands since they also belonged to Spain.[11] Because of this change, New Year's Eve happened on Monday, 30 December 1844. Effective Wednesday, 1 January 1845, the Philippines, Guam, Mariana Islands and Caroline Islands switched back to Asian date. Western publications were generally unaware of this change until the early 1890s, so erroneously gave the International Date Line a large western bulge for the next half century.

Which brings me to the actual issue on GIS.SE. Currently the date-line tag description talks about the antimeridian, going so far as to actually link to the Wikipedia article on the 180th Meridian. To quote it, because I hope to change it shortly:

And in many GIS you should do extra work to have correct representation and calculations for objects such as Lines and Polygons which crosses dateline.

This tag marks questions where problems have been caused by dateline crossing.

You may look into wiki to get more details https://en.wikipedia.org/wiki/180th_meridian

I would like to propose antimeridian as a synonym for the date-line tag, based on current usage of date-line. All seven existing questions tagged date-line are actually about the antimeridian. However:

I don't think there is a case to synonymize/merge these two tags because, as you have so clearly illustrated they are not the same and should be easy to distinguish.

I think the way forward should be to:

Not the answer you're looking for? Browse other questions tagged discussion tags .