Why was question closed for being primarily opinion-based?

The intent of my question was to ask if you can improve accuracy for position determination when you have a local atomic clock at hand.

Can GNSS precision be improved with a local atomic clock?

Why would this be a question with "primarily opinion-based" answers?

As you can see from the redacted timeline for your question the decision to place it On Hold was not unanimous: 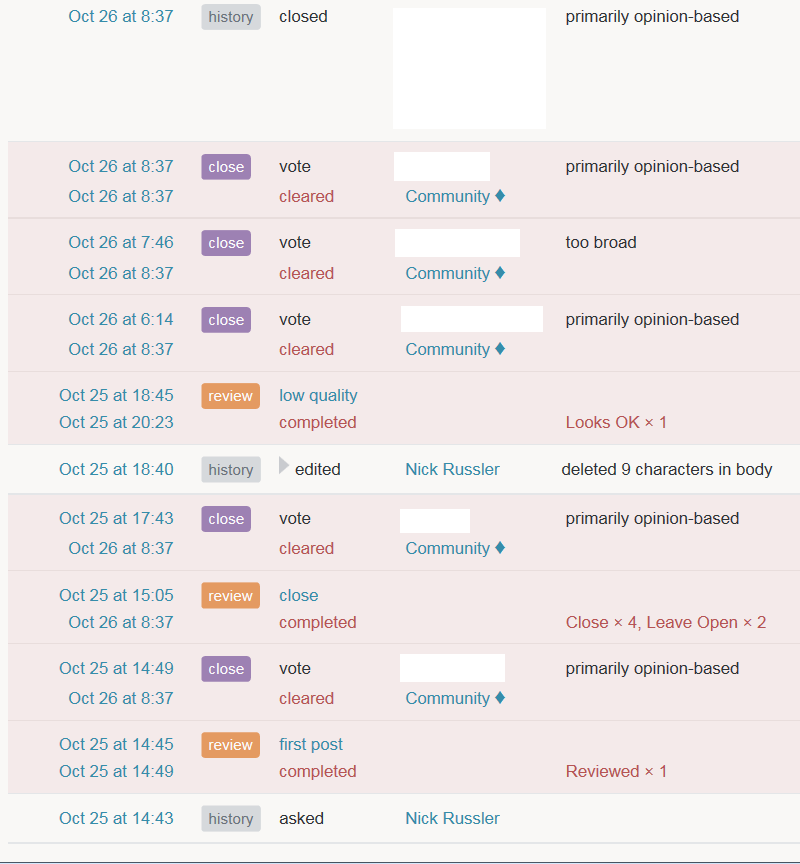 Two reviewers thought that it should be left open (and another has since re-opened it). Another adjudged that it was not low quality.

Of the five reviewers who voted to close it, one thought it was Too Broad, and the other four thought it Primarily Opinion-based.

Personally, if I were to have taken any action on your very brief question I think it would have been to downvote it for not showing evidence of effort to find an answer prior to posting. Of the two Close reasons chosen by the reviewers, I think Too Broad would have been the more likely choice, because it falls outside of how I interpret Primarily Opinion-based.

Not the answer you're looking for? Browse other questions tagged discussion close-reasons .

0
Why was coding question closed?
8
Why was Question about license conditions closed?
17
Are questions about cartographic visualization too opinion based for this forum?
9
How much can we edit a question, before it becomes an entirely different question?
6
Marking a question offtopic and letting user know why?
7
Why was this question put on hold?
10
Are opinions that bad?
1
scope of “opinion-based”
0
Seeking explanation as to why question is too broad?