How can GIS SE increase the voting activity within the community?

I'd like to see an increase of voting across the GIS SE community. I don't have any data that I can point to, only anecdotally. It seems the majority of posts only garner a handful of votes at best during the course of a day. I think this is a supportive approach to increasing participation across the board as an incentive for users engaging in posts during a day.

It's been several days since I last checked this question I posted, I have yet to select an answer as I'm more interested in the discussion that is ongoing which has been informative. One dialog I found helpful was this reminder from GIS SE or SE to vote, it was prominent and caught my attention as a good example of a possible action item that can help support the reminders to users to support their fellow peers 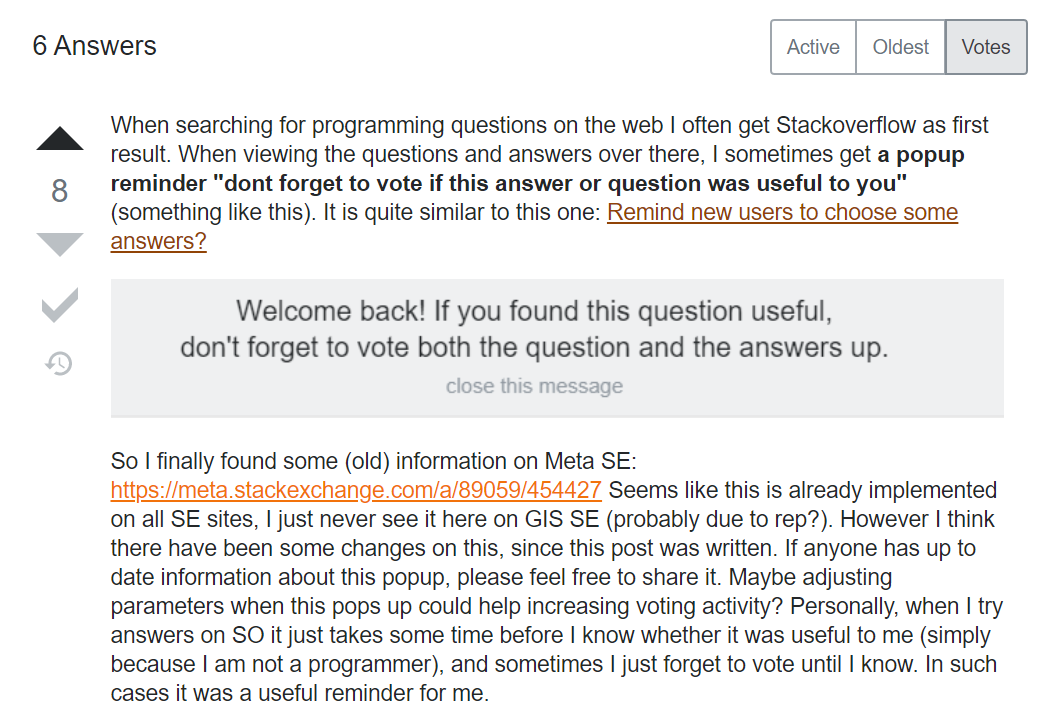 When searching for programming questions on the web I often get Stackoverflow as first result. When viewing the questions and answers over there, I sometimes get a popup reminder "dont forget to vote if this answer or question was useful to you" (something like this). It is quite similar to this one: Remind new users to choose some answers?

So I finally found some (old) information on Meta SE: https://meta.stackexchange.com/a/89059/454427 Seems like this is already implemented on all SE sites, I just never see it here on GIS SE (probably due to rep?). However I think there have been some changes on this, since this post was written. If anyone has up to date information about this popup, please feel free to share it. Maybe adjusting parameters when this pops up could help increasing voting activity? Personally, when I try answers on SO it just takes some time before I know whether it was useful to me (simply because I am not a programmer), and sometimes I just forget to vote until I know. In such cases it was a useful reminder for me.

Traffic to the site has decreased since 23rd March 2020 due to the global impact of covid-19. (more people choosing video/conferencing over browsing?)

The trend is a slow rise, people working from home finding more time to visiting GIS.SE.

Stats over the year (votes/traffic) 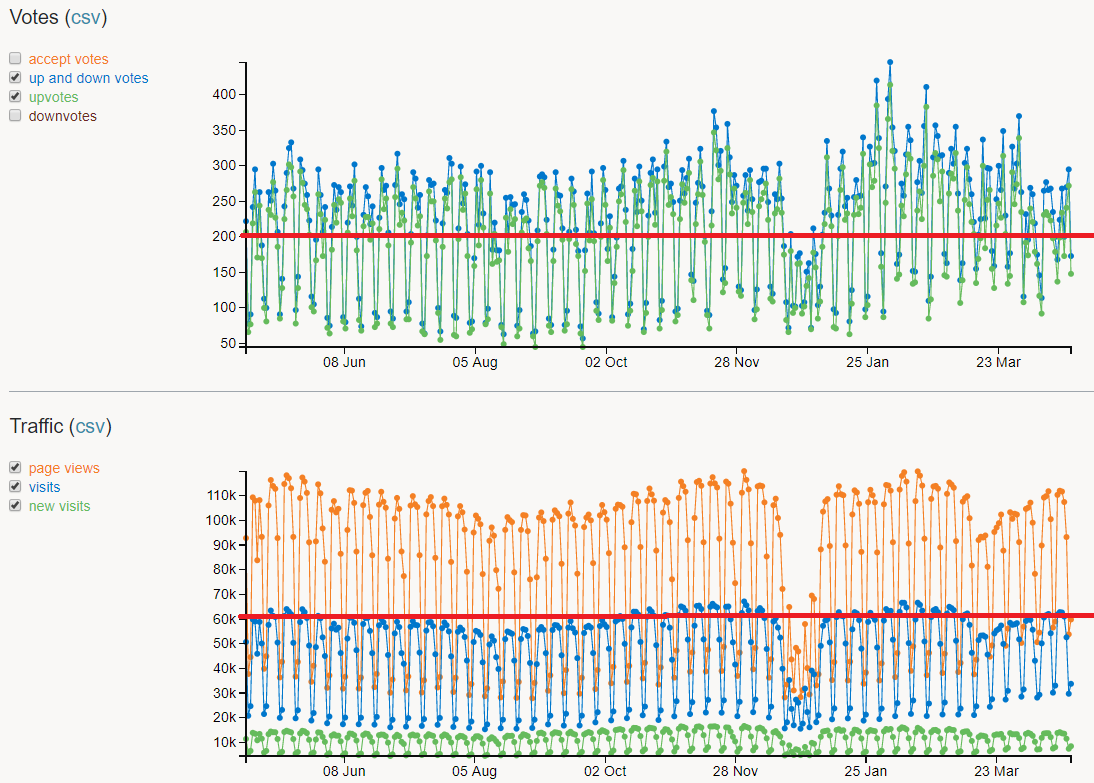 via mod tools (data is anomalised)

I help manage a different site (not StackExchange based) and I find it incredibly difficult to get any voting on questions. Most questions have zero votes. I think many reasons are the same as here.

I suspect that users find answers through searching, probably Google. Unless the search engine is sophisticated enough to sort by upvotes, then voting doesn't have a lot of worth. The top result matches more keywords, rather than having the most votes.

Plus we get many more hits than we have members. I believe that many users are not registered to the site, so can't upvote questions or answers.

That's my reasoning. I really don't know how to improve matters, but I'm open to suggestions too!

I too would "like to see an increase of voting across the GIS SE community" and I think the onus for this should not fall just upon those users who are already volunteering their time to answer questions.

If I open a question and it states what the asker wants to do, describes what they have tried and where they are stuck, is in the form of a single question, includes no chit chat (e.g. greeting, signature, thanks), and is not a candidate for closure, then it will get an upvote from me.

If I view an answer and it answers a question (that is not a candidate for closure) in a useful way, without asking additional questions, then it will get an upvote from me.

The search results are very likely influenced by votes.

The answers with more votes get promoted to the top of the page. Search engines usually put more weight on what they find closer to the beginning of a page rather then at the end of it.

Which types of questions do get much more than average participation/voting?

If we can identify these, maybe there is something on them (like a pattern) we can try help replicating to other questions.

One small set of those engaged questions are the ones which makes the Hot Network Question (HNQ) list. Of course, after they turn to be HNQ, participation on them increases rapidly, but to make it there in the first place, it was already higher than average.

GIS HNQ questions can be seen here (thanks Midavalo). Quickly analyzing them, I see some patterns:

Those are generally questions asked in hot subjects, but besides being well asked, aided with resources in the sense they are objectively understandable and answerable.

Hence, I think constructive feedback to help OPs improving their posts in all possible ways (whichever you think they are; code and screenshots are examples) can make a difference in increasing participation (voting is a consequence). Feedback through:

The general idea is to continue 'giving the fish' (editing, reviewing, etc.), but at the same time making our best to try 'teaching how to fish' as well. And hopefully having more people joining the cause.

I have 15+ years experience in GIS and can't actually vote or comment because of not enough rep points on stackexchange. That limits my participation.

Not the answer you're looking for? Browse other questions tagged discussion votes .

3
Softening the definition of “Community Wiki”, here on GIS
8
How can I monitor questions on multiple SE sites?
4
How can SE prioritize questions for a Conference?
4
How can I find deleted or migrated questions?
41
Does GIS have a low voting problem?
12
How can we clarify question titles?
4
Is it possible to accelerate the update of users's tab on GIS Meta
9
Do moderator close/on-hold votes conflict with the organic nature of the voting system?
9
How does the community feel about non-arcpy answers to arcpy questions?