I voted to Reopen the following post Resizing attribute table on QGIS print layout, and I left a comment (the only comment there so far) justifying why I thought it should have been reopen:

Voting to reopen as the question is perfectly fine. Asking it to be more focused is non-sense because aligning text within a table and resizing columns to fit such aligned text are almost tasks one does altogether. Such that is, answers show it is the same approach/logic which addresses both topics. We should not take a number/bullet formatting literally

@PolyGeo was the one who closed it in the first place with a single moderator binding vote. So far, so good. 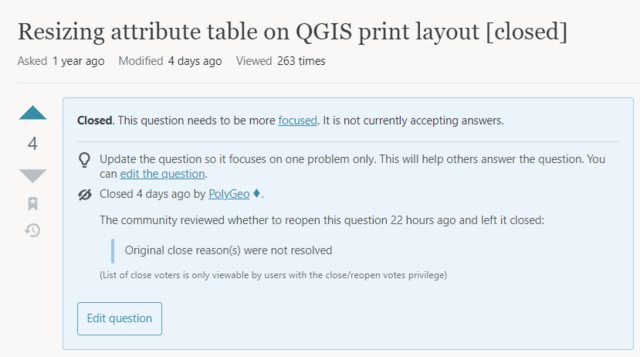 After I voted to reopen, it had collected two more reopen votes and was probably in the way of being reopened. But PolyGeo came in again and cast another moderator closing (leave closed) binding vote (link to review). 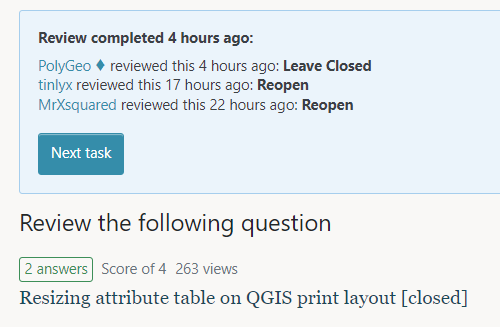 Is this fair? At minimum odd? It seems like abusing the binding vote privilege; i.e., cast it once, and then, unilaterally overrule another 3 contrary votes to keep own's previous decision? What?

In their question the asker tells us that they think they "have three questions". I think they have two, and voted to close (and later to leave closed) based on that.

If they or any other reviewer/editor had edited the question to make it clear that they were only asking one then I may have voted to re-open it instead.

I think such an edit would be wise to start by removing the count and listing of multiple questions.

My recollection is that I only visited this question the second time because the Review Queues indicator had gone red with Re-open Votes being the queue that had triggered it.

I think voting (up, down, close, re-open) on posts should always be based on current content.

Not the answer you're looking for? Browse other questions tagged discussion review-queues moderators .

3
How does the Suggested Edit review process work?
1
Reopen a post (marked as duplicated) on inserting layers to QGIS in a specific position
4
How does the new user question review process work?
11
Why do I see so many answers in the Late Answers Review Queue?
15
2016 Moderator Election Q&A - Questionnaire
9
Do moderator close/on-hold votes conflict with the organic nature of the voting system?
12
What is the red dot in the review queues?
22
"One question per question" rule being applied excessively literally
4
2020: a year in moderation