Should the same question with different answers be marked as duplicate and/or merged?

It was then pointed out to me that the earlier answers did not address the new question as they didn't cover qgis, even though the question was a duplicate. To which I replied that was correct and I'd misread the answers, and therefore deleted my flag comment. Actually, I just confused myself when doing so, as my original thought/logic still stands. Perhaps the commenter didn't consider the merge option just like I forgot that was my intent, or I should have added my answer to the earlier question and not the new one before flagging. And I think some of that confusion also stems from the wording of the duplicate flag, that it already has an answer.

I've looked at a few meta discussions either on or closely related to this topic, most specifically this one and its included references (including some info about 'gardening' which I need to read/view more thoroughly), but they all seem to be aimed at questions with the same answers. One of them talks about updating old questions, but that was mostly about software versions and not new information or alternate solutions. To me (at the moment), it would make more sense to have fewer versions of the same question with as many answers as possible rather than a bunch of the same questions with different answers. I understand that the quality of both question and answer is important and much discussed on the subject of duplicates, and perhaps I'll get more clarity on that with the 'gardening' info mentioned above.

It doesn't help that after deleting my flag comment I then found yet another question which truly was a duplicate, but had already used my flag for that question. All I can say is I'm new and I need more coffee. There are likely also further levels of editing consideration that my rep hasn't exposed me to yet.

Edit 1: It seems my original question has different implications depending on your level of rep, since only higher levels can actually perform a merge, much less be aware of that function and how it works. As a result, this question sort of forks - the original still stands for people with that ability.

For those without, I want to pull out and emphasize an embedded question from above: Should I have added my (different) answer to the earlier question rather than the new one and then flagged the new one; or should I answer the new one, flag it, and assume the next level up will keep the merge function in mind? Or in either case, post an additional comment to the default flag stating that intent?

As it stands, duplicate could apply to either a question or an answer, or both. The flag available, at least at my level, makes no distinction but seems to imply (based on the blog post mentioned below) it is intended for the case of both.

Your Question prompted me to look for advice on how Questions can be merged in the process of making them duplicates.

The best reference that I could find quickly was this blog posting by Jeff Atwood. It looks like the mechanism of making a Question into a duplicate of another while retaining its Answers via a merge is already available but perhaps not widely understood.

Based on that I plan to make more of an effort to flag Questions such as you describe to the Moderators with a note suggesting Merging rather than simply making one a Duplicate of the other. I have observed that, when appropriate, they often do this anyway but it never hurts to offer advice if you are concerned that a good Answer on a Question to be made Duplicate appears in danger of being lost.

By this I mean to use the flag button along the lines of what is in the graphic below. 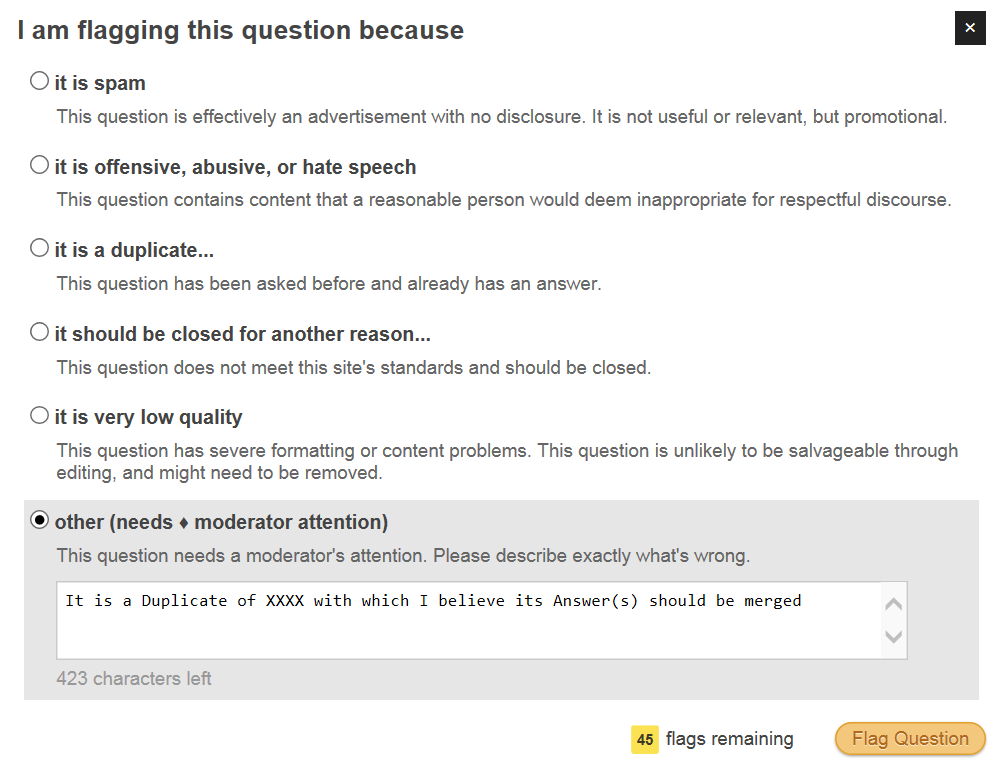 With respect to "gardening", I recommend viewing Good Stack Overflow Citizen by Jeff Atwood, but the essence is that to maximise the chance of getting a good or great Answer to a Question it is best to not just post your first attempt and hope for the best but to read, edit, re-read, and re-edit it in order to make it as clear and appealing to potential Answerers and later readers as you can. Feedback in the way of Comments and Answers can help guide you to spot potential deficiencies in making what you are asking understood. This is analogous to tending to seeds and seedlings in a garden until they look mature, and then pruning, fertilizing, etc them to improve their look/productivity later.

Should I have added my (different) answer to the earlier question rather than the new one and then flagged the new one; or should I answer the new one, flag it, and assume the next level up will keep the merge function in mind? Or in either case, post an additional comment to the default flag stating that intent?

... I recommend trying to look for the first time a Question has been asked, placing your Answer on that, and then seek to Close the more recent one as a standard Duplicate. However, if you have already placed your Answer on the more recent one and do not want to delete and re-post it, then using flag as in the graphic above should ensure that it becomes a duplicate via a merge with your answer surviving.

Not the answer you're looking for? Browse other questions tagged discussion duplicate-questions .

2
Should we mark question as duplicate when adding a similar question?

7
When to flag as duplicate, and which one should I flag?
7
When flagging a duplicate, which question should be flagged as the original?
7
Marking questions as duplicate when by same user and unanswered?
12
Should “duplicate” be used when the question is different, but the actual problem is the same?
7
How to raise same question on different Stack Exchange sites?
8
Should I edit an answer, create a new answer, or create a new question (and answer it)?
8
Should GUI questions really be duplicates of coded solutions?
2
Why was a question marked a duplicate of something asking for completely different information?
5
Deleting merged questions asked by the same OP?